It’s crazy busy around here, with the end of the year festivities all over the place, gorgeous warm weather begging us to be outside, and laundry (always) and dishes (oh, I hate dishes) constantly piled up all over the place.

I’m finding that I’m especially enjoying this season.  Not just spring, but also this period in my life.  Three kids, all getting older and changing so much from who they were.

My kids are all between three and four years apart.  Jessie and Sam are three years and five months apart, and Sam and Julie are three years and nine months apart.  Which means that they’re all, pretty consistently, in completely different stages of life.  For a while there, Jessie and Sam were pretty much in the same place, but they aren’t anymore.  And while Julie was, for a while there, several developmental stages behind her brother, she’s caught up a lot.  Still decidedly younger, but definitely a kid and not a baby anymore.

Jessie is most assuredly a tween.  Eleven is a big year, developmentally, and she’s in the middle of fifteen different crisis’s at any one time.  Or she’s not – she’s decidedly laid back and relaxed, in control of everything and mature and poised and confident.  Or she’s sobbing because she’s FAILED science (turns out she got a C on a paper), and her life is ruined.  She’s funny and smart and sweet and loving, or miserable and mad and ready to kill each one of us.  We’re constantly on a roller coaster these days, and while there are moments of calm and quiet, you always know that terror and exhilaration are waiting just up ahead.

Which is a big contrast to Sam.  Because he’s all calm and peace.  There are minor hiccups, if he gets really overtired or needs some space, but mostly, he’s just chill.  It’s hard sometimes to remember that, when he wants to,  he’s fully capable of throwing the whole family into an uproar, just because it’s so rare now.  He’s just… a happy, relaxed, peaceful sort of kid.  And when I say peaceful, I mean that he doesn’t look for a fight with anyone.  He’s still totally into army guys, sword fighting and ninja battles, but other than that – totally peaceful.  He’s excelling at school, has tons of friends, eats well, sleeps great.  He’s just EASY.  Addicted to the kindle, the Wii and netflix, but also in love with his bike and can ride like the wind.

My Julianna Ruth is four years old.  Which is a hell of a lot older than three.  She’s a different person suddenly, with long gorgeous hair, definitive opinions about everything, and most aggravated when we fail to live up to her expectations.  She’s got high expectations.  She’s graduated to a booster seat, has her own bike that she rides with varying degrees of competency (depending on the day), and an ever growing vocabulary.  She’s not a little kid anymore, not really.  She’s got one more year of preschool and then she’s off to kindergarten.  She’s taken to diligently “doing her homework” every night (when she drapes herself across the couch with a coloring pad and crayons and hollers if we disturb her), and insists on “helping” Marc every night by making the coffee and assisting in taking out his contact lenses.

This is a very different place, in my life, than it was a year ago.  I’m finding that while I still get a little wistful when I see a mom who’s pregnant, or a tiny baby snuggled up in a carrier, I also really love that I don’t have to worry about naptimes, or taking kids to the potty, or lugging a diaper bag.  I don’t have to be as vigilant – Sam goes to parties now and just joins in.  Jessie brings a book and closets herself off somewhere if she needs space, and mixes in with the bunch if she’s in the mood for that.  Julie can carry on a conversation with anyone (and frequently does).  It’s just different.   Things haven’t gotten easier, not entirely, it’s a lot more mental, a lot more time in the car dropping them hither and yon, and there’s still a ton of housework and laundry, but it’s different.  I’m not sure that I like it better than when they were all little and demanding, because I loved that time in my life.  But I love this one as much. 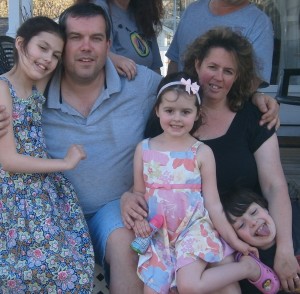