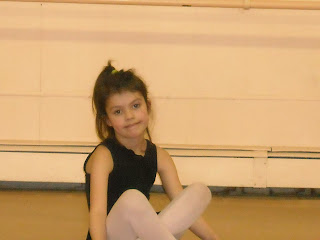 Yesterday was observation day at dance class. Jessie has been going to dance class since she was two, and every year, one day in January, they let parents/grandparents in to watch their kids’ class. My friend Sara took Sam home with her yesterday afternoon, so it was just me and Jess (and my in-laws) and it was wonderful. She’s so gorgeous and so grown up, I still catch my breath sometimes with utter amazement that I’m lucky enough to have her. I cry every year at observation day, and yesterday was no exception. She’s so perfect, so uniquely Jessie, and I fall a little bit more in love with her every time I watch her dance. The baby girl bounced along with her, she was so active! Especially during the tap shoe portion of the class, it was like she was bopping along with her big sister 🙂
After we got home (I took her to McDonalds for dinner, alone time with Mommy and fast food – special treat :-), I started the going to bed ritual. She likes to have some time putting the babies to bed (she has thirteen or so dolls that all require a great deal of attention) and then we do jammies, teeth, a chapter from Harry Potter, and then she reads herself to sleep.
Sam, meanwhile, has no bedtime routine whatsoever. He just rocks and rolls until he crashes. I feel as though he’s getting the shaft as the second child – I was much more structured with Jess at that age. Most nights, we do teeth, but not last night. Marc is more involved in Sam’s bedtime routine (a hold over from me desperately trying to wean him) and he’s completely fine with it as it is. Sam goes to sleep when he’s tired. And until then, he’s up partying like a rock star. Last night, he spent a half hour rearranging his stuffed animals (or as we call them, his people) behind and on top of me while I moaned on the couch (I was SO ITCHY), and then laid down and fell asleep.
He sleeps great thru the night (far better than Jessie did at that age, or now, come to think of it). Sam’s been great at sleeping from the very beginning. When he’s tired, he just goes to sleep. I don’t know why I think it’s so amazing, it makes sense, but Jess was never like that, and I’m not like that. Falling asleep is a PROCESS for both of us – Jessie, even as a baby, used to fight sleep. She’d cry herself to sleep, every night, in my arms, until she’d finally consent to nurse. And she really seemed to thrive under a routine, it calmed her down and got her in a good sleeping place, and even then, at least half the time, she’d still fight falling asleep. Whereas Sam, he’s just a different kid. He goes to sleep when he’s tired. Doesn’t matter what’s going on, he’ll conk out on the chair, on the couch, even on the floor sometimes.
I think I feel guilty because Jessie’s bedtime has always been so much work. It was parenting, it was something I had to participate in, I felt like I was being a good mom by putting my child to bed with snuggles and songs and love. Sam’s bedtime, especially now that he’s not nursing, requires nothing from me, and any attempt to insert myself into the process is pointless. I tried to read to him last night and he COULD NOT SIT STILL. He was just bouncy, had no interest in the book (that he’d picked out) and just wanted to boogie. Left to his own devices, he just goes until he’s done, and then lays down and sleeps. He doesn’t like lullabies, he’ll snuggle, sure, but doesn’t really need it, and while I can occasionally coax him to sit and read, it’s not something he wants or will even sit still for consistently.
Marc says I’m creating a problem where one doesn’t exist. Sam’s perfectly content, getting plenty of sleep, has all the attention he wants or needs, and I shouldn’t feel guilty because he can put himself to sleep when he’s tired. After all, isn’t that a good thing? Going to sleep when he’s tired. He doesn’t fight it, he doesn’t need to be coaxed down to sleep, he’s more than content to just crash when he’s ready. Having a child that just doesn’t seem to need the nighttime parenting isn’t necessarily something to worry about, right? It’s not like he’s in preschool and NEEDS to wake up at a certain time, and there are mornings when he’ll sleep in until nine or nine thirty. If he needs the sleep, he finds a way to get it. And he’d just as soon do it without my involvement.
Maybe it’s just me – I suppose I shouldn’t feel guilty, like I’m giving him less of me, because he could have it if he wanted it. I would love to snuggle him to sleep, with lullabies and stories… and I shouldn’t complain – because for three and a half years, he needed me to nurse him to sleep. He’s outgrown me, and that need. That’s a good thing, right? I’m thrilled about not nursing him, but feel bad that he’s outgrown the need for me at bed. I’d feel better if he had transitioned to needing stories and songs – instead he skipped that and moved directly to “don’t bother me, Mama, I’m going to sleep when I’m ready.” If it’s not broke, don’t fix it – at least that’s what I’m trying to tell myself…