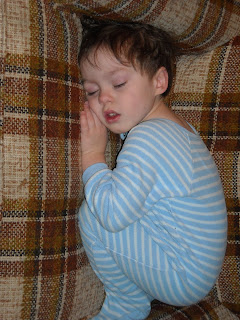 Sam doesn’t throw the temper tantrums that Jess does… he’s a much more even tempered sort of child. But when he does… wow. And although I was bragging earlier about how well weaning went – being able to nurse him down from a tantrum was so amazingly useful. I really missed being able to do that today.

The child was grubby. He just was – he needed a bath. He hates baths. For whatever reason – both my kids hate the tub. Jess used to scream so hard about a bath when she was his age, she literally would break out in hives. So when he said he wanted one, I enthusiastically filled the tub, collected the toys and popped him in there. After about ten minutes, he announced he was ready to get out. But he was grubby – his hair needed to be washed, his body needed to be washed, and I couldn’t let him get out without washing him.

It was ugly – screaming, yelling, trying to climb out – things were thrown across the bathroom, but his hair was washed, his body had soap applied and rinsed – and I pulled him out. At which point he started screaming – jumping up and down, screaming at the top of his lungs. And it went on and on and on. He begged to nurse, I let him try, but the milk is gone, and it’s so painful for me, sucking on dry super sensitive pregnant breasts, I couldn’t bear it. It didn’t do much more than just let him catch his breath for another bout of screaming. And jumping, and kicking and sobbing.

I was pretty tired before I started, but now am exhausted. He finally calmed down, after I paced around the apartment, holding his naked body up high over my stomach and letting him cry on my shoulder. He picked out his favorite jammies and I managed to distract him with an old cartoon called Fangface. He liked the name, and as far as I can tell, it’s an odd version of Scooby Do. Actually, I just leaned back to glance at him in the living room, and the poor kid is sound asleep on the chair. He’s so cute I could cry. This is why we don’t kill them – because just when they’ve pushed us to the point where we’re about to completely lose our minds, they do something so sweet or adorable, like fall asleep in the chair, all snuggled up with his butt in the air like he’s a baby.

I so wish I could go to bed too.