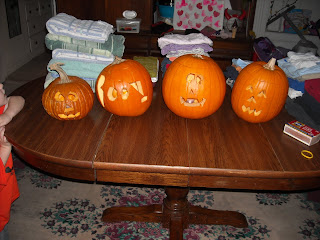 Friday night – I went to Salem with the girls in my family. Not all of them, but there were 12 of us altogether and it was fabulous. Three of my aunts, my mother, my sister and two stepsister and two cousins. We had two side by side hotel rooms and just really loved every minute of it. My cousin Becky and I were the middle ones – with older aunts and the other four girls were all at least six years younger than we were. Becky and I are just exceptionally close – she’s my best friend, and it was awesome to spend that much time with the women in my family. And SAM DIDN’T EVEN NOTICE I WAS GONE. Well, I’m sure he noticed, but he didn’t fuss once, had a great night, fell asleep on Marc’s lap, slept thru the night, and was sunshiney happy the next day.
We all got readings done (because that’s what you do when you go to Salem). Mine was a little… off, she first started off with I wasn’t married (which I am), then decided that we’re obviously going thru a rough patch (which we aren’t). She talked about the kids – and ascribed character traits to both that belonged to the other (that Sam was an intense child, thoughtful and worried a lot, and that Jess was smooth sailing and calm all the time), but it was still fun. We had dinner in an Irish bar, which involved a lot of stepdancing and hollering with the band.
Pumpkin carving on Sunday was a fiasco – too many kids, WAY too much screaming and yelling and crying… I was sick to my stomach (spoke too soon on the morning sickness going away) and ended up taking some Reglan. This promptly put me to sleep, which meant that poor Marc had to carve four pumpkins by himself. They came out great – and the kids had fun in the end, so that’s what matters, right?

3 thoughts on “Salem and Pumpkin Carving”